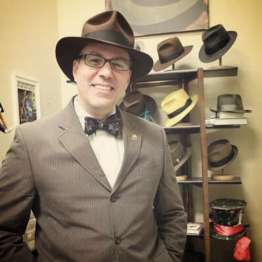 Penman started out in the hat business after his career as a NYC (and Hillsboro) firefighter was cut short by an injury. Looking for something creative to do with his time, he started taking apart old hats and putting them together again.

With the encouragement of hatters, Steve Delk and Marc Kitter (the men responsible for the fedoras in the 4th Indiana Jones film), John turned a $850 investment into a successful business. He has customers all over the world.

John recreated the fedora worn by aviator/filmmaker/business Howard Hughes. That now sits in the cockpit of the Spruce Goose in an Oregon Museum. John also developed a hat stand - hat jack that displays a hat and keeps it stretched to the exact measurement (called the Jack/Stand)

For as long as I can remember, I have been enamored with the style imposed by a well worn hat.  My interest in hat-making stems from my love of the fedoras of the silver screen from Hollywood's Golden Age, particularly those worn by Humphrey Bogart, James Cagney, Jimmy Stewart And I was always impressed by the way my stepfather wore his stingy brim fedora.  It's hard to put in to words what the right hat can do for the image of a man.

I spent the first 33 years of my life growing up in New York City and so it was there I first saw in theaters a film that would later cement my decision to get involved in hat making: Raiders of the Lost Ark.  My love of the Indiana Jones hat worn so well by Harrison Ford inspired my quest for the ultimate Raiders hat.  For over 20 years I searched in vain for a hat that would live up to my expectations.  Then in 2004 my quest finally came to a successful close when I discovered the Adventurebilt Hat Co., the brainchild of master hatter and Mississippian, Steve Delk. In Adventurebilt Hats, not only did I find the ultimate Raiders fedora, but also a friendship with a man as devoted to hats as myself.

Through my friendship with Steve, I was quickly introduced to Marc Kitter of Adventurebilt Deluxe.  With Marc I found yet another friend as obsessed as I was with the intricate details of the Raiders hat.  After countless conversations with these gentlemen, I was inspired to start taking apart old hats and putting them back together.  And soon, with their full support, I finally decided to launch my own enterprise.  Thus, in 2008, the Penman Hat Company was born.  To Steve and Marc, I thank you again for your inspiration, support and friendship.  To my customers, my goal is to hand-make a hat for you that you will wear again and again with style and pride.