The Raider - The silhouette is unmistakable.  When Indiana Jones first comes on screen in Raiders of the Lost Ark, his hat is as much a part of his character as is the scar on Harrison Ford’s chin.  The Raiders hat is the most unique, and for many fans, the best.
To begin with, it has a very tall, boxy crown, and a rather large brim.  But what really sets it apart from its successors is the very tight front pinch, and the a-symmetrical, dimensionally cut brim, which creates the characteristic “turn” that is not found in any of the other three movie hats.
To accurately reproduce this I was able to acquire a hand cut hat from Rich Swales the actual hat maker for Raiders of the Lost Arc. Because this hat is the most popular of all the Indy hats, it is therefore the most scrutinized.  Thus, I have developed two distinct blocks: one for beaver felt fedoras, and one for rabbit felt fedoras (though the ribbon comes from the same manufacturer and has the same bow design).  This is to ensure that regardless of which felt you choose, you can be confident that your hat will resemble the hats seen in the film as much as possible.

This hat is rugged, stylish, and full of character.  It can be worn along with your most durable hiking and adventuring gear, but also naturally complements a nice suit of tweed for your day at work, be it teaching at the University or simply heading to the office.

I use special thread to sew on all the parts. This thread is so tough that you can not break it with your hands, so it will certainly survive being dragged under a truck if you happen to find yourself in that particular situation.

New to the Adventurebilt Legacy Collection is the "Young Indy." This hat replicates the hat that Shawn Patrick Flanery wore in the TV show "The Adventures of Young Indiana Jones.You now can wear a hat that Indy wore on his early historical adventures. With it's wide ribbon, soft creases and wide non-dimensional brim.

To My Dear Customers,


It is with great pride that I announce The Adventurebilt Legacy Collection, a brand new line of hats inspired by the Indiana Jones films.

The first offering in the collection is none other than the hat that started it all: the brown "Hero" fedora we see Indy wearing as he steps out of the shadows of the Peruvian Jungle.   And so it began with the felt.  I worked diligently to produce a light-weight and very pliable rabbit felt to replicate what we see on film. To complement this, I selected a very supple and lightweight leather to create the perfect sweatband, creating the most comfortable and effortless fit.  Having these two important elements in play, I then turned to Master hatter Steve Delk's original interpretation of the Raiders block to create the iconic look of the crown, finishing the inside with a bridal satin embroidered AB liner. The jigs I use to get the dimensiona

lly cut brim were taken from a hand cut brim by Richard Swales, the man responsible for the original film used hats. I use not only the same ribbon used in the film, but sew it on in the exact same way, a simple yet important detail meant for the discerning eye of the truest Indiana Jones fans. I hope you'll enjoy these offerings as much as I do and I look forward to adding to the collection as time goes on. 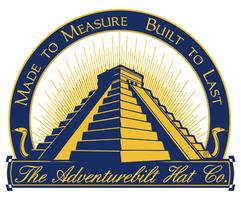 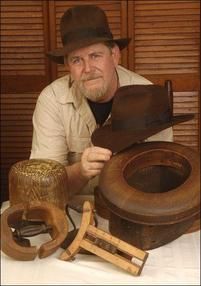 A few years ago John Penman sent me a hat to check out as he wanted to know, from me, how he was doing in hat making. First ya gotta realize that I call ‘em as I see ‘em, and NEVER would tell a guy a lie about his work just to make him feel good. I was ready to give John plenty of constructive critiques, but was deeply impressed when I realized I simply did not have to. I checked out John's work with a fine tooth comb and told him that his hats are just as good as what I make. And I meant it. Some people are just naturals when it comes to certain things, and John is a natural at making hats. Now understand, others (I won't mention any names) have sent me their hats and most had a long way to go before they could in good conscience sell what they made. John was the first to send me a hat that had such attention to the important details that "make" a hat. I could give John no advice because he already had everything down pat. I know John's customers will be elated each time they get one of these hats. John's skills are top notch.


The Raiders : How the raiders hat is creased off center or what some like to call "the Turn."

Now, if a customer wanted a fedora as seen in the first Indy film made using the same wood blocks, felt, ribbon and sweatband they would be out of luck. But I did not want this to be the case for the Crystal Skull fedora. Therefore, John Penman and I have made arrangements to ensure that the Indy IV hat will live on. John has my Crystal Skull blocks (for both the brown Hero hat, as well as the unique gray travel fedora), and uses all my same suppliers, thus the hat he makes for you will be an exact clone of the hats I made for Indy IV. I also taught John the tricks I used when making this particular fedora, a measure I took in order to make it very difficult for another hatter to replicate this hat. John has the full legal rights to the Adventurebilt name and to the CS fedora plus he has my Raiders block if anyone in the future would want my own rendition of that most iconic of hats. Now all Indy fans and hat fans have access to a clone of the hat used in Indy IV. John is doing me a great favor in keeping the Adventurebilt name alive, as well as the hats I have made for Indy, so there is no doubt that the fedora you own will look just like Indy's.

The Temple - In the only prequel to Raiders, Indy’s fedora is quite different.  No longer do we see the tall, boxy crown, and gone is the turn.

Instead, Indy’s signature costume piece features a slightly smaller brim, and the crown, ever so much shorter, also features a very slight, yet noticeable taper.  Additionally, the front pinch is now much looser, and would stay so through the franchises next two sequels.

The Crusader - In Indy’s third adventure, some of the trademark look of the Raiders hat is back, with the hats we see in the film generally looking a bit taller and boxier than those in Temple of Doom.

And though the hats in Last Crusade were most certainly built off the same blocks as the hats in Temple of Doom, the hat often has an unmistakable “cowboy curl” to further differentiate it from both the Raiders and Temple of  Doom fedoras.

The bow design also changed a bit in Temple of Doom andwas retained in this hat.